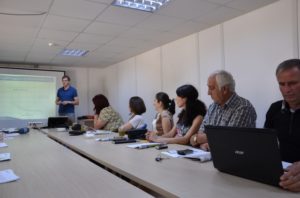 On July 15  Adjaristsqali Georgia LLC organized an information tour for local mass media representatives. The goal of the tour was to inform local journalists about the progression of construction activities and mitigation measures that company implements in order to ensure safety of local people. Journalists visited hydropower area and Shuakhevi tunnel adit.

HSE Director Jeff Terry explained that excavation involves twice daily blasting and it is carried out far beyond the allowable limit. The Company has developed grievance redress mechanism and company employees react on each grievance received from locals in a timely manner.

AGL intends to organize more information tours for other stakeholders.