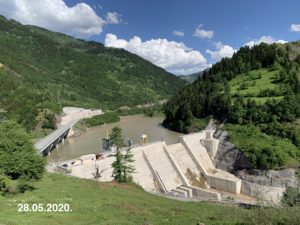 AGL categorically wishes to respond to the recent publishing of a video of the Didachara dam by one of the local media outlets, as the said report sought to raise certain questions about safety concerns amongst the society and is negatively affecting the project’s reputation despite the issue having no basis at all. The leakages being highlighted in the said video has no impact on the safety performance or stability of the dam structure.  It is disappointing that the media agency chose to publish these reports despite having being provided a technical explanation about the issue.

AGL declares with full responsibility that 52 m high Didachara Dam is reliable and stable and has been designed in compliance with Georgian and International standards and firmly rejects any implied suggestions raising safety concerns.

The dam was constructed in early 2017 and has been performing as per the Technical Requirements. The routine maintenance of various structures is being performed as per the maintenance plan.

Every large concrete structure is constructed in a particular sequence and comprises separate sections which are termed as construction joints. Because of the expansion and contraction of the different concrete sections due to temperature variations, such leakages are commonly experienced which are addressed during normal maintenance activities by way of grouting works. Since the reservoir was filled again in January 2020, grouting works were already scheduled after observing for any expected leakages subsequent to filling up of the reservoir.

Such work can be taken up only after filling up of the reservoir, according to the maintenance plan, this work on Didachara dam has been planned in May and June. As of date, 80% of grouting work has been completed.

There is absolutely no cause for concern regarding the safety of the dam.