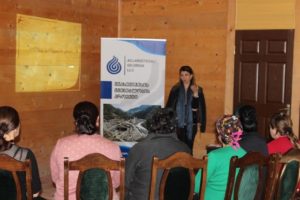 On May 15, Adjaristsqali Georgia LLC conducted an informational meeting with women living in the villages of Paksadzeebi and Geladzeebi. The goal of this meeting was to raise awareness of health issues.

The main topic of the meeting was breast cancer. Topics included early identification, risk factors, methods of treatment, and free screening programs run by the government.

The meeting was held with the help of the Tanadgoma Association. Trainings were led by staff from the Center for Reproductive Health of Batumi.

Similar meetings on abortion and contraception will be held in other villages as well. 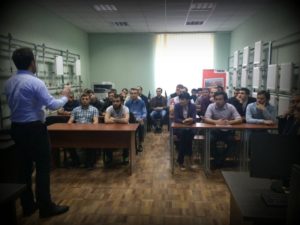 Today, representatives of Adjaristsqali Georgia LLC held a presentation at the Technical University of Georgia about a student internship program which will be implemented as part of the Shuakhevi HPP project.

One of Adjaristsqali Georgia LLC’s goals is to gain as many qualified personnel in the hydroelectric field as possible. Zviad Diasamidze, the director of the company’s land, environment and social issues department, provided students and lecturers with comprehensive information about the internship program, saying, “You will have an opportunity to spend your internship alongside with Georgian and leading foreign specialists which will be a very interesting and important experience”.

“Adjaristsqali Georgia is the first company which found us on their own and expressed a desire to recruit our students. I am sure that our students will use this opportunity successfully,” said noted professor Gia Arabidze.

Professor Iuri Lomidze spoke about the importance of the project and declared, “The Shuakhevi HPP project is one of the most modern projects in terms of technologies. For a student, working in this company will be a huge step forward in terms of professional development”.

The meeting included a question and answer session which gave students a chance to receive answers to all of the questions that they had.

Applications for this program can be submitted from May 1 through May 15. The best candidates will be interviewed by the company’s representatives on May 15. The final selections will be announced on May 29, and these students will be able to have a paid internship on the Shuakhevi HPP construction project.

AGL received recognition for implementation of a successful investment project 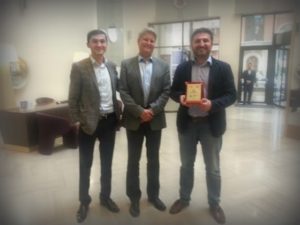 Today, Sheraton Hotel hosted a ceremony which awarded successful businessmen in Adjara. Adjaristsqali Georgia received an award from the chairman of Chamber of Industry and Trade – Tamaz Shavadze, for implementing a successful investment project.

Head of Autonomous Republic of Adjara, Archil Khabadze made a speech in front of guests: “these are businessmen who operate in Adjara and assist in the increase of employment and budget. Awarding them motivates them to continue doing business. I believe that today’s award ceremony is very supportive and businessmen responded respectively. We should establish this as a tradition and the government’s attitude towards business should become more favorable. 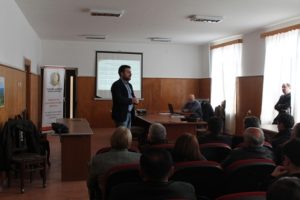 On April 22, 2015, our first working meetings were held in the Shuakhevi and Khulo municipalities. During the meeting, representatives of Adjaristsqali Georgia LLC and the Institute of Democracy provided comprehensive information to representatives of local self-governing bodies, public schools, educational resource centers, and Ministry of Internal Affairs territorial units.

This project aims at improving the lives of families living within the project area and supporting local businesses. The project is being implemented by the Institute of Democracy with financial support from Adjaristsqali Georgia LLC.

Within the scope of the project, grants for setting up family enterprises, learning professional skills, purchasing inventory, hiring specialists, etc. will be awarded to families living in the targeted villages. Households living in these villages will be supported in the development of self-employment skills and the establishment of family enterprises. The amount of each grant will range from 1000 to 22,000 GEL.

The project is being implemented in the following villages:

We are deeply affected by the accident that occurred in the evening of 17 April 2015 which resulted in two fatalities and one injured worker. Our thoughts are with affected families and  we express our sympathy and support to them.

Our main priority is the safety of all staff working in Shuakhevi Hydropower Project. We take this accident very seriously and the Project team has initiated internal investigation on priority.

Currently, law enforcement bodies are investigating the cause of accident and the Project team is fully cooperating with the investigation.

Further statement will be released upon the completion of the investigation.

Adjaristsqali Georgia and residents of village Makhalakidzeebi signed a memorandum

Adjaristsqali Georgia LLC plans to sign similar memorandums with other villages situated within the project area in near future. 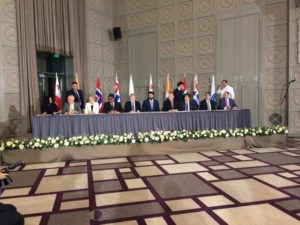 On Tuesday, 19 March, at 7 p.m. the Sheraton Hotel Batumi hosted the financial close of the Shuakhevi Hydropower Project and the signing of the Build-Own-Operate Direct Agreement with the Government of Georgia.

AGL is the largest investment in Georgia’s in energy sector to date. The project will develop the 187-megawatt Shuakhevi hydropower scheme. Electricity from the power plant will be generated starting in autumn of 2016. The Shuakhevi hydropower plant will satisfy Georgia’s electricity demand during winter, thereby reducing its dependence on imported fuel and increasing its renewable energy output by 450 GW/h annually.

The project is the first hydropower project in Georgia certified by the United Nations Framework Convention on Climate Change for carbon emission reductions. It is expected reduce greenhouse gas emissions by more than 200,000 tons per year.

The project employs approximately 600 Georgians, most recruited from local communitites. AGL is contributing to local budget of Adjara by paying approximately 3.2 million Georgian lari in property tax in 2015, five million in 2016, and eight million from 2017 onwards

The total investment by the Project is estimated at 400 million US dollars.

The Project will also foster cross-border electricity trading by exporting electricity to Turkey through a Black Sea Transmission Line financed by EBRD.

The company sets a high standard of social responsibility and is actively supporting the development of the region, with approximately six million lari allocated to local social projects.

English Education Program is to start 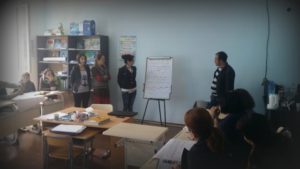 The AGL Education Project is a pilot project aimed at improving the quality of English education and raising the overall English language abilities of locals in the municipalities of Shuakhevi and Khulo, both of which are affected by the construction of the Adjaritsqali Hydropower Cascade Project.

AGL is providing local English teachers with a training program focusing on English language skills and instructional strategies. The company is also conducting enrichment programs for gifted and talented high school students. These include a high school English-language essay contest and a series of afternoon English discussions and debates. Although all members of these municipalities are welcome to participate, priority will be given to students and teachers from the villages most affected by the construction.

These projects provide several significant benefits to local communities by raising the overall level of English in the region. Improving local knowledge of English will lead to a more employable workforce, which benefits both AGL and the community.  The English teacher training program is helping to improve local teachers’ abilities to use, and in turn, teach the English language and encourage them to use English more confidently and more frequently in the classroom. This will enable them to create an immersive English classroom and contribute to better educational outcomes for students.  The high school program offers gifted and talented young people an opportunity to make the most of their potential by challenging them to use their English abilities in a way not available to them in their regular classrooms. Activities include mock job interviews, debates, and a youth parliament.

These projects have been underway since the end of February 2015 and will last through the end of the school year in June. They are serving as the pilot for a larger project that will hopefully continue through the construction period. After receiving feedback from project participants and other stakeholders at the conclusion of the pilot in June, AGL will evaluate the success of the pilot and develop a long-term project for the 2015-2016 school year and beyond.

The project is being organized by Michael Decker, an experienced teacher with several years of experience working with Georgian schools, and Tamsyn Webster, a certified English teacher from the UK. 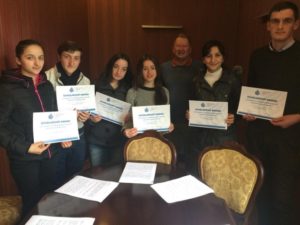 Applicants of the competition were students living in Adjara highland region. The winner students were revealed by the competition commission formed by Ministry of Education, Culture and Sports of Adjara.

Eligible applicants for the competition funded by the company were the students who enrolled in state accredited institutions in 2014. Students will receive scholarships respective to their academic report within the future four years.

Adjaristsqali Georgia LLC is a company with high social responsibility and consistently makes its own contribution in the long-term development of the region. 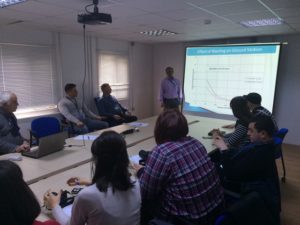 According to results for February 2015, Adjaristsqali Georgia employs 561 citizens of Georgia on Shuakhevi-hesi project. Together with foreign professionals, the company employs experienced Georgian engineers and geologists.

Adjaristsqali Georgia LLC plans to organize similar media tours in the future in order to raise media engagement and awareness.