Construction Completion of the Shuakhevi HPP 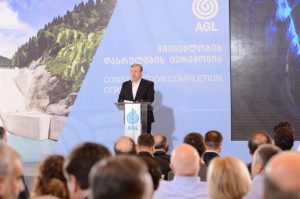 The construction of Shuakhevi HPP launched in the fall of 2013.  As part of this project, two weirs with their respective reservoirs and dams were constructed, along with diversion tunnels to channel the water. The total length of the Shuakhevi HPP tunnel system, the second longest structure of this type in the world, is 37 kilometres, which is twice as long as the combined length of all HPP tunnels built in Georgia. The Project investment cost exceeded USD 420 million.  The total installed capacity of all of its hydropower plants is 187 MW. 730 Georgian citizens were employed in construction activities.  The Shuakhevi HPP is the largest hydropower plant to be built in Georgia over the past fifty years.

After the launch of operations, the Shuakhevi HPP project will significantly contribute to Georgia’s path toward energy independence.  The power that they generate will remain in Georgia throughout the winter, a period of energy deficit.

The Shuakhevi HPP is the first hydropower project in Georgia to have been certified by the UN Framework Convention on Climate Change to reduce carbon emissions. The Shuakhevi HPP will generate 540 GWh of clean energy while lowering greenhouse gases emissions by more than 200,000 tons per year.

Since the launch of the Shuakhevi HPP project, Adjaristsqali Georgia has actively worked to improve the living conditions of the population within the project area and to promote the region’s long-term development. As part of its corporate social responsibility program, the company has implemented over 70 social projects, most of which were planned as public-private partnerships. Over 10,000 local residents have been engaged in the company’s infrastructure, education, and community development projects. For example, Adjaristsqali Georgia is currently financing the construction of Georgia’s largest alpine botanic garden in the Goderdzi tourist area in order to promote tourism in the area. The company is also helping to set up a garment factory in Khulo which will employ up to 300 local residents, in addition to several other large infrastructure projects implemented with the active participation of the local population.